MAY MEMBER OF THE MONTH – TEASCHA!

APRIL MEMBER OF THE MONTH – CHELSY!

MARCH MEMBER OF THE MONTH – SCOTT! 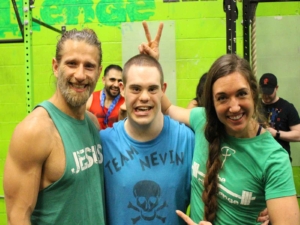 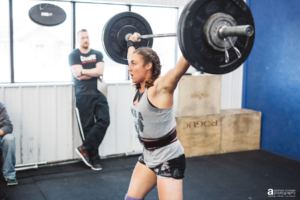 CONFESSIONS OF A CROSSFIT MAMA

It’s been almost a year and a half since I completed the most epic AMRAPP (As Many Rounds As Possible of Pushing) of my life.  My beautiful baby boy is approaching 18-months and as he continues to grow, I have spent some time looking back at my CrossFit Mama journey.  It has been full of good, bad and ugly.  For the benefit of other CrossFit moms, moms-to-be, or anyone who wants to better empathize with those individuals in your community box, Here is my story.

I can tell you that coming back to CrossFit after having a baby has been one of the hardest, most humbling experiences of my life.   BUT it has also been the most rewarding, healthy and healing journeys I’ve had.  CrossFit with a kiddo changes everything.  Everything.  Before Titan, CrossFit was my life.  Many of you know what I’m talking about.  It becomes an obsession.  I would wake up in the morning focused on when I could get my WOD in for the day.  I would go back and forth trying to decide whether I liked morning or afternoon WODS better.  This was seriously my thought process – “If I go in the morning, I probably won’t be able to push as hard and won’t have any idea of what finishing time is respectable because I’ll be one of the first ones to try it.  Plus if I do it early, I won’t have the rest of the day to look forward to it.  But if I wait until the afternoon, I may be too tired and won’t be able to push as hard and I’ll be stressing all day worrying that something might come up and I won’t be able to make it to the box.”  Like I said, obsessed.  And I was uber competitive, in a dumb way.  I mean, I was good, but by no means an advanced CrossFitter but I acted like I was the cat’s meow.  It’s actually embarrassing now that I think back on it.

When I found out I was pregnant my first thoughts were, “Awesome.  Wait, what about CrossFit?!”  I had made some big gains that year and felt the sky was the limit.  But now I had another human being in side of me.  I knew I couldn’t keep working out in the way that I had and if I’m completely honest with you, it wasn’t just because I wanted to protect my baby.  I mean, of course I didn’t want to do anything to jeopardize the health or safety of my sweet growing bundle, but I knew I was really competitive.  I knew I would struggle pulling back the reins during a WOD, especially when everyone around me was pushing their limits.  I felt it would be depressing to feel my progress decline in comparison to everyone else.  Wow, that’s embarrassing to admit out loud.  Welp, I promised to give you the good, the bad and the ugly of it, folks.  I also didn’t feel that doing just 12 minutes of moderate intensity would be enough for me.  For this reason, I decided my best bet would be to create my own program of 45-60 minute moderate intensity strength and cardio at home.  That way there would be no judging eyes and I could push myself however hard I felt safe.  (A quick note on this – Can we just all acknowledge what a crappy mom-judging culture we have?!).  I so admire those women who can CrossFit through pregnancy, but I just couldn’t do it in a healthy way.  I am hopeful that next time around I will be at a better place mentally and physically to do this.  We’ll see…  Anyway, that became my new norm until Ti was born.

I remember the day six weeks post delivery when I got the okay to start exercising again.  I drove straight to the box from the clinic.  Oh, it felt SOOO good to be back in that haven.  But it quickly became evident to me that I had lost A LOT more strength then I had realized.  Pull ups were gone.  Weight that used to feel light was now impossible to lift.  Not to mention all the new noises and other things that were occurring with HSPUs and double-unders (see, I told you it would get ugly).  I was so discouraged and honestly considered whether it was worth trying to get back into it.  I was humiliated.  Although everyone knew I had just had a baby, I still wondered whether they were thinking snide comments about me in their heads.  I was so humbled by it all.  I knew I wouldn’t be able to devote all my time and energy to CrossFit anymore.  Finding time to make it to the box five days a week would be a struggle now that I was working full-time and had a baby.  I would have to be okay with no longer being one of the better athletes in the gym and give up my ego.  When I decided to do that, it was like a big weight was lifted off of my shoulders (no pun intended).  For the first time in a long time, I didn’t feel pressure to perform at the top level.  I could just enjoy the community and do my best and stop comparing myself to everyone else.  And rather than focusing on how much strength I had lost, I got to relive each moment of accomplishment!  I got to experience that first strict pull ups, first Rx WOD, etc.

Now, I’d love to insert here a before and after picture to show how incredible the fight back has been, but I have to be real with y’all – your eyes would be drawn to the stretchies and a big hole that used to be my cute belly piercing.  Ain’t nobody want to see that.  Give them a little time to fade and shrink and then we might give that a go.

I am finally free to enjoy CrossFit as it was meant to be.  Rather than being my life, it enhances my life.  If I can’t get to the box for a WOD, it doesn’t ruin my day.  If I have to cut a WOD short because Titan needs me, I can walk away and be fine with it.  There are times when I feel my former obsession creeping up, but I can usually quickly squelch it when I realize how much richer my life is now.  I’d give 20 pounds off of my squat for Titan’s smile any day.  Although I haven’t gotten all of my former PR’s back, I am getting ever closer and I believe 2017 will bring even better PR’s and accomplishments than ever.  And if not, I’ll be okay with that.  CrossFit is amaze-balls.  But being a mom is even better.